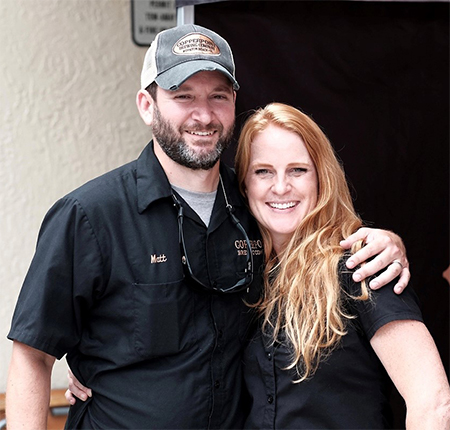 Posted at 09:32h in In the News by Coppertop

Palm Beach State College alumnus Matt Cox has been brewing since 2000. When Cox opened Copperpoint Brewing Company in 2015, he brought a gem to Boynton Beach. Keeping everything close to home with local resources for both beer and bar—from the ingredients for brewing to the tables for gathering—Copperpoint is a true neighborhood establishment that has become a staple of local craftsmanship.

Copperpoint’s design is purposeful, and the copper bar was a must. The result has landed somewhere between a Colorado mountain town tavern and your favorite local pub. Whether you’re a beer fan or not, there is no denying the ambiance and warm décor of Copperpoint’s comfortable taproom and inviting surroundings.

Artistry blends freshness from local and global sources, some coming from Germany and the Czech Republic, two cultures that have defined the craft for centuries. Following his own traditions, Cox is an artist, creating and crafting an array of tastes, and Copperpoint has earned its accolades. The Colorado Beer Festival awarded Copperpoint “best chocolate beer,” a remarkable blend of cocoa, Madagascar vanilla, coconut and expert craftsmanship made from real, quality ingredients.

Cox describes his days at then Palm Beach Community College from 2000 to 2001 fondly, its essence in the community and relationships he knew in the mid-1990s, inspired by the microbrew movement of the time. With 13 years of experience in the brewing business, he started Copperpoint and today has partnered with the College that was part of his path to becoming a successful entrepreneur. In October 2022, he provided a sponsorship for Palm Beach State’s Golf Classic at PGA National in Palm Beach Gardens. Moreover, he is driven by a community and philanthropic mindset, sending proceeds to individuals and organizations across the state in response to 2022’s Hurricane Ian.

With a crew of only two, Cox is producing extraordinary lagers, ales and more. He credits Laura, his wife, who runs the day-to-day operation along with him, and their partnership. “She keeps the place going. I just make the beer.” In fact, the Copperpoint brand is inspired by Laura’s red hair. And there are compelling stories behind the beer. Copperpoint’s A-10 Red IPA (India Pale Ale) takes its moniker from the plane that Matt’s business partner’s grandfather helped engineer during World War II, a personal and patriotic honor for a friend and an American hero.

Copperpoint’s equipment comes from companies in the U.S. and throughout North America, important in the establishment of the Copperpoint company for Cox. “Everything needs great attention to detail, including the water chemistry and a reverse osmosis process. What we do wouldn’t matter without the quality water.”

Great pleasure lies in listening to anyone who is a master of his or her craft, and Cox embodies expertise as distinct as his menu of original recipes for citrus blends, hoppy pilsners and special stouts. And Cox is not interested in either following or setting trends. Rather, he simply exemplifies how passion and perseverance can prevail, one copper pint at a time.

This story is from Palm Beach State College’s official website.